A few weeks ago my wife and I spent two weeks in Europe visiting London, Paris, Berner Oberland/Gimmelwald in Switzerland, Cinque Terre and Rome in Italy. Although it was pretty expensive, considering the dollar fell to a six-month low against the euro during that period, the trip was worth every penny. Anyway, I want to share my experience about the planning process and specifically what camera gear I took and how I managed to shoot almost 80 GB of RAW images without taking a laptop on the trip.

We started planning the trip around end of January. I have been to the UK, Paris and some parts of Switzerland before but since my wife had never been to Europe at that time, I thought we should do something different this year for our summer vacation. So I went on Amazon, searched for a guide book and came across Rick Steves’ Europe Through the Back Door (Amazon, Google Books). I went ahead and bought it because after reading the excerpt I liked his travel philosophy. 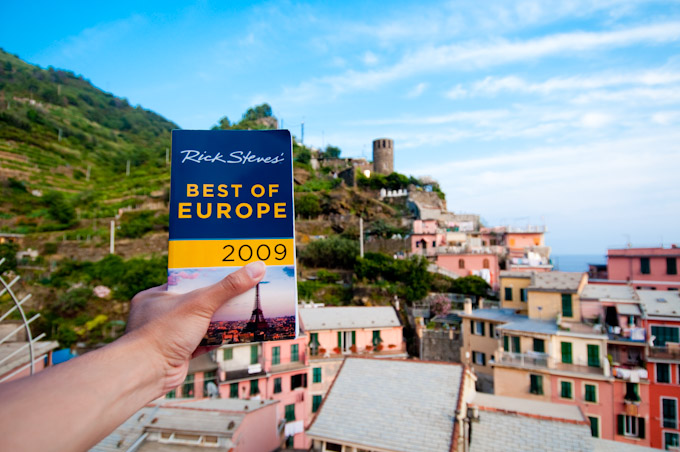 After spending a week reading the book and checking out Rick Steves’ website, I realized that he had a ton of followers. It is actually a cult. Anyway, I came up with a preliminary itinerary, which I then posted on a Rick Steves message board for feedback and found that it was too intensive for a 16-day trip. After a few refinements, my final itinerary was the following:

Initially I was trying to decide whether we could get hotels by winging it when got there. However, since we knew where we wanted to go, I just went ahead and book our hotels and B&B’s well in advanced. I stayed with some friends in London and used Hilton points for four nights in Paris and Rome, which saved us quite a bit of money.

For transportation, our main mean of transportation between European cities was train. The European train system is far better than what exists in the USA. We decided to buy point-to-point tickets when we got there because it would be cheaper than buying Europe Rail passes in our situation.

Packing was actually fun and challenging at first. The photo below tells you how much stuff I took on the trip. I think I had 5 T’s, 2 shorts, 2 pants, bunch of socks and undies, some maps and Rick’s book, electronics stuff, a D300 without the vertical grip, a 50mm f/1.4, a 12-24mm f/4, a flash, and a gorillapod. I learned to pack this way from OneBag.com and Rick’s book.

I chose to go with one backpack because I wanted to be able to swift through airports, train stations and towns quickly given that we would be on the move every few days. If I were to go on a beach resort vacation, I would probably choose a rolling bag. Fortunately, for this trip I was able to convince my wife to use a Samsonite wheeled backpack, which is smaller than mine.

The camera bag that I used on the trip is a Think Thank Photo Urban Disguise 20. Seriously Think Tank makes godsend products. This particular bag fit my needs really well. It was light enough that I could carry it all day. It was also big enough to stuff all my gear and some maps in. It might be a bit too bulky to use with a Think Tank speedbelt.

On the trip I had four 8 GB Sandisk Extreme III compact flash cards. Since I shoot raw (lossless compressed about 12 MB on D300), I knew that 32 GB would be enough for the entire trip. So I bought an Epson P-3000. It is a portable multimedia photo viewer that has a 40 GB 2.5″ hard drive inside, which means that you can crack it open and upgrade the drive to 500 GB if you want. I didn’t do it for the trip but might spend $50 getting a 200 GB upgrade for wedding shoots. OK, so for the trip I had about 72 GB to work with and it turned out that I came pretty close, about 65 GB I think. A little bit about my on the go backup strategy, at the end of everyday I backed up all shots from that day to the device. I didn’t wait for the CFs to be full. Doing this gave me a clean CF at beginning of everyday. Also I never kept the CFs and P-3000 in the same bag due to security concerns.

As previously mentioned, I took a D300 without the vertical grip (so much lighter without it but felt weird initially when taking portrait shots), a 50mm f/1.4, and a 12-24mm f/4. I chose these two lenses because they are super light. Thought about 18-200mm VR but didn’t go there because I would have to buy it and I was in love so much with my 50 and ultra-wide lenses.

In the next post, I am going to share some photos we took in London as well as some stories. Stay tuned. You can subscribe to my blog here.